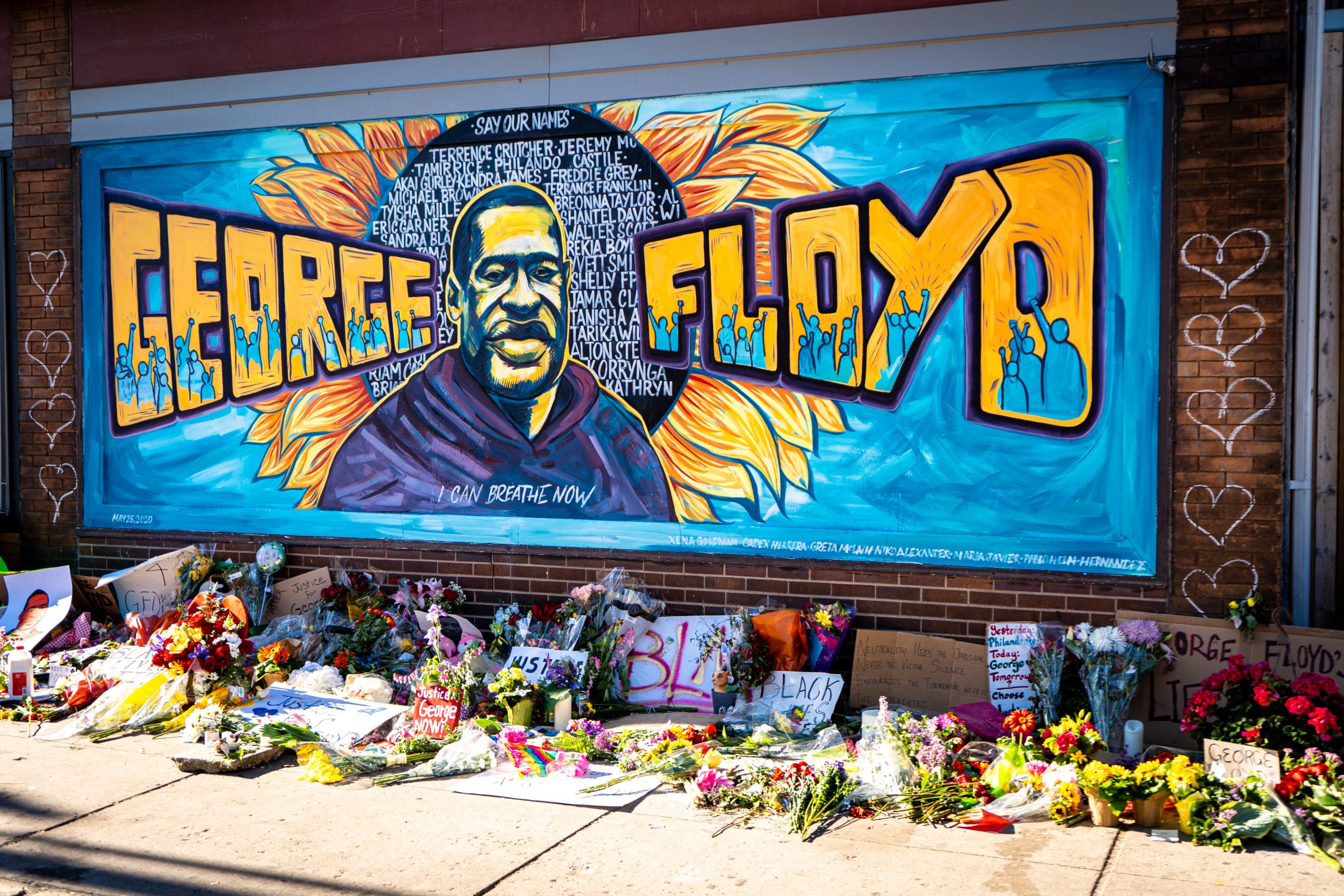 The Ends of Anti-Racist Protest

If one thinks, as I do, that racism functions as justification for dominative exploitation, then the meaning and implications of George Floyd’s brutal murder extend far beyond the public protests raging across America. We should celebrate and actively participate in those protests, doing what we can to support any democratic action that might bring about more just and humane orders. In our protests, we should demand of our fellow Americans horror and disgust over these things we have been doing since the founding of this country, remaining open to the possibility that the public lynching of black men, women, and children might very well serve as our nation’s founding act. Yet protest needs to go beyond what we do in the streets, itself remaining open to the possibility that it might take us further than we thought necessary, make more of us than we imagined possible. After all, broader realities make George Floyd’s death not only predictable but productive, occurring within systems of inequality so breathtakingly unnatural as to require constant reproduction—and by any means necessary, George Floyd’s life be damned.

We have too often failed to ask ourselves what racism is for, what work it does. It is too easy to envision racism primarily as a product of flawed presumptions about the categorical status of persons—i.e., we are racist insofar as we rank-order those we should count as equal. In this vein, racial violence issues from a simple category mistake, and anti-racism entails getting our categories straight. The too-easy solution would then be to check prejudice with better information. The protests are meant to help this. We get in the streets in order to remind others, and maybe ourselves, of George Floyd’s humanness, with the thought that establishing that fact will once and for all stop the killing. If the masses should fail to be properly educated, we turn to more aggressive tactics: ferreting out the racism, shouting it down, and casting it to the margins of polite society.

It is a precious image, the idea that we colonize and genocide, enslave and murder, rape and pillage, out of ignorance. One can see the allure, the notion that we need only wake up and recognize that, for example, Asians are not in fact viruses. Protests announce that protesters understand as much, and outrage that others do not. The work of protest here would be difficult, but not impossible, hard but not that hard, contained and limited. We can breathe a sigh of relief that the promised end is in sight, if only we can power through, the current protests giving society that final push it needs to cross the finish line.

In fact, the precious image distracts from systems of dominative exploitation that racism serves. Racism functions as justification for violent exploitation. It greases the wheels of processes that commodify—“thingify” Martin Luther King, Jr., said—others for our benefit. We colonize and genocide others not because we confuse them with something less than human. We colonize and genocide because doing so, somehow, proves handy. Racism is a matter of convenience. We exploit those we can, and racialization (categorizing others racially) helps the “can” along. Racism facilitates domination, and domination facilitates exploitation. Individuals and societies tend to, for whatever reasons, want to think well of themselves. Race as an explanatory concept helps them do that, smoothing over baseline exploitation by situating matters within structures of domination: carceral states, gross health disparities, environmental crisis, gendered violence, etc., tied to property regimes, value extraction, predatory finance, labor regulation, etc. These structures of domination tell each one what she is for, how she matters, a ruse that serves some up to be commodified and some to commodify, some to have and some to not have. My ascribed Asian-American identity functions to identify where I stand in the pecking order, and so while I might suffer being used by some (as cheap labor, as cultural leverage, as foil, as symbol) at least the same system affords me the opportunity to use others (as cheaper labor, easier leverage, more ready foils and symbols).

The terror of our racist history—a history we are still making—is not only that in our racism we colonize, genocide, enslave, murder, rape, and pillage, but also that we dehumanize those we know, and cannot fail to know, to be human. The humanness of African Americans has never been in question, not seriously—what could be more obvious? What is in question is the humanity of those who would snuff out a life seemingly without regard, four uniformed men looking blankly off in the distance as if focused on their next meal. One fears that such brutality—played out over eight-and-a-half horrifying minutes—is what happens when cops are tasked with policing conditions (i.e., breathtaking inequality) that cannot help but threaten their humanity, as if their humanity can only come into view by robbing others of theirs. Scapegoating the police is a luxury some of us have insofar as we benefit from the inequality that we ask them to secure on our behalf. This is not to say that inequality drives all cops to brutality, only that it does some.

If racism facilitates dominative exploitation, if we are talking about habits of practice as much as habits of mind (habits of mind as habits of practice), then protest should serve as a pathway into dismantling systems that make racism useful. Consider the familiar sites of inequality—housing, education, and employment. One will not be too surprised to learn that when municipalities zone for freeways, parks, and trash dumps, for instance, they do so in ways that systematically serve the interests of the city’s economic elite and work against the welfare of its poor, outrageous “best practices” smoothed over by the fact that the former tend to be white and the latter, non-white. The municipalities zone accordingly not because they hate people of color but because some being white and some being non-white works to excuse the practice. The excuses build on one another, eventuating in ideologies and institutions that do in effect hate people of color.

We might similarly examine the all-too-convenient connections between George Floyd’s death and the wildly disproportionate distribution of COVID-19 death, between Ahmaud Arbery’s death and financially lucrative redlining procedures, between Breonna Taylor’s death and those woefully inequitable zoning codes, between Melissa Ventura’s death and mental health issues disproportionately afflicting people of color. Demands from protesters to defund the police or abolish prisons stem from the conviction that racist ideologies and racist institutions have become inextricably bound to one another. A system reboot might have the revolutionary effect of making racism less useful. Paired with homegrown plans for redistributing public funds (taking funds previously earmarked for police and prisons and shifting them to housing, education, and employment), these proposals represent the kind of measures that can bring about real change, even transformation. Giving up the idea that inequality should be policed rather than addressed will raise further questions about the sources of inequality and the forms of democratic life necessary for addressing it. We now stand at a watershed moment between creation and chaos, where the protest movement’s ability to effect lasting change hangs on whether it can resist, in the face of so many provocations, allowing its energies and ideas to devolve into the kind of violence some would appropriate to sidetrack the conversation. “The Spirit of God hovers above the waters,” indeed.

Last week as tens of thousands of Americans took to the streets, Rise University Preparatory commenced its first graduating class. Situated in the Bayview/Hunters Point section of San Francisco, an area continuously assaulted by brazen environmental racism and racially targeted redevelopment schemes, Rise Prep empowers children otherwise pushed to the underside of a commodifying political economy that black Marxists have long referred to as racial capitalism. Its existence depends, in part, on redistributing monies shared between a small Christian church and a private tech firm, together the brainchild of Stanford and Cal grads who decided long ago that downward mobility is the best way into God’s kingdom, or at least that privilege is not something to be held onto but rather given up. Rise Prep’s ecology of economic sharing represents what public education would be if not crushed by the interests of capital, the joyful work and the common good of educating our kids. Rise Prep’s teachers consider the graduation part of their protest against George Floyd’s death, believing not that their work as educators excuses them from the good work of getting in the streets, but that anti-racist protest finds its ends in liberating systems of oppression, and in their case as beneficiaries of those systems, repentance.

Pressing further, anti-racists will find that their work amounts to witness as much as protest, witness as a form of protest and protest as a form of witness—witness that racial capitalism is parasitic on a foundational divine economy, where the difference between the two comes in how one orders one’s loves and the value that order ascribes to who does and does not matter. Whether protest takes one in the direction of a Rise Prep or redistributing public funds, or both as parallel and intersecting pathways, depends on the object of one’s witness. We Christians are in the season of Pentecost, the birth not of the divine economy (the triune life of God does not begin just as it does not end) but of systems transformed in order to bear witness to it. In large measure, the truthfulness of that economy turns on whether black lives matter for the Christians who profess it, reminding us that the revolution now underway has been two thousand years in the making.